One of the most daunting challenges and greatest unknowns that we had to face during the ride were the climbs on route. The thought of riding uphill for over two hours was already close to incomprehensible, added to that the extra weight and the cumulative fatigue were enough for me to push the thoughts to the back of my mind. Each time the question of how or why would float back up, I would just will it away. This proved to be a successful strategy, continuing in blissful ignorance until coming face to face with the monstrous climbs.

The first stand out climb was a mere 250 ft high, but it’s very name is sufficient to strike fear into the heart of road cyclists everywhere. The Koppenberg. 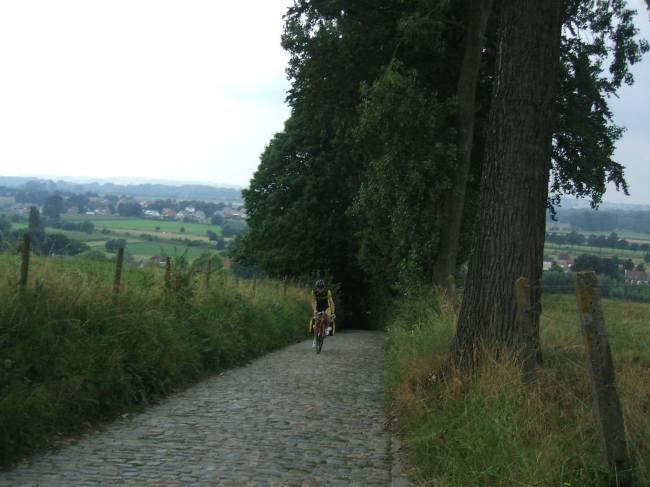 For years it has been a prominent feature in the classic cycling race the Ronde Van Vlandeeren, the combination of cobbles and 22% grade make it key as the final shake down of the race kicks off. Fortunately we weren’t going to have to race up it with 100 other riders, but its name certainly punctuated conversation as we rolled through the dull grey industrial estates in Belgium that morning; incredulous whisperings and murmuring about the sense of the plan. Finally we took a series of innocuous right turns and finding ourselves on bone shaking cobbles approaching the foot of the climb. No warning, and there it was, a wall of cobble stones. As the road pitches up it becomes a battle between keeping your front wheel from heading skyward, and fighting for traction as the rear wheel skips over the cobbles and all the while keeping forward momentum. As Rob powered ahead to get a couple of photos I was more concerned with not coming to a standstill, as I wobbled around him stood in the middle of the road. I managed to return the favour slightly further on, getting going again on cobbles uphill was no mean feat. We were to face sterner tests later that day though as we hit a dead straight road that made up for it’s lack of corners with  a series of endless undulations. We rode on watching the sun sinking lower and lower in the sky, determined creep beyond the arbitrary finish line after 180 odd kilometres of route instructions, finally tucking our tent out of sight behind a billboard on the edge of a small Belgian village.

A few days later we took on the climb up to Triberg in the Black Forest, a gentle introduction to the mountains as the road rose to just over 1000m. A preview of the huge day that was to come as we rode out of Liechentenstein, up into the Swiss Alps before passing into Italy. I can safely say it was the most stunning day I have ever had on a bike. Packing our gear away in the floodlights of an enormous pet food factory, and struggling to lift the bikes over the barriers by the side of the road was an inconspicuous start to such an epic day of riding. Liechtenstein proved to be even smaller than I had imagined, as we drifted through the capital city at rush hour in just a few minutes and hit the Swiss border, the road beginning to climb already.