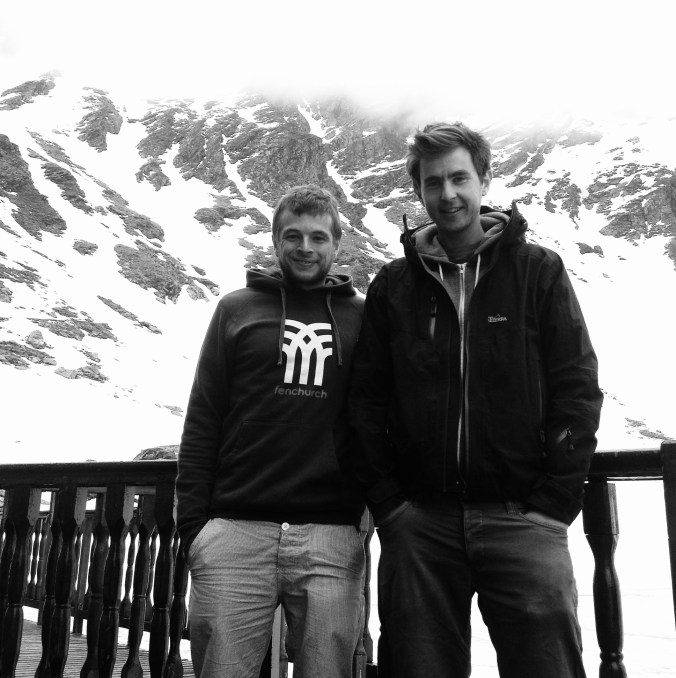 Some choice words to describe how it has been leading the team down in the Alfa community in Arad these last nine months. It feels like the one constant has been the amount of change. It’s had me thinking a lot about courage recently, especially since Julia preached on it a few Sunday’s ago, and I hope to get some of those thoughts down on paper in the next few days.

But, in the meantime what better way to display courage than by deciding to take a last minute hitching trip last weekend. So last minute that I was texting Luke at 7.30am before heading to work last Friday, to pack a bag and be ready so we could head off as soon as the day was over. We both hate planning ahead anyway, here’s how it looked.

18.00 : Start trying to hitch east out of Arad. Finally get a ride with a guy who stopped to take a leak, but only after about 2 hours of waiting.

22.30: Arrive in the centre of Deva, which has an unwelcoming feel at best. Drowsily we browse the isles at Billa looking for dinner before rushing back to hold up our “SIBIU” sign at the hitching point. Maybe 15 minutes later, if that, a huge 18 wheeler pulls over and offers us a ride. We’d make it that evening!

00.30: We get dropped off on the hard shoulder of the highway passing to the north of Sibiu. Ecstatic and slightly delirious we hop the crash barrier and start walking towards the town. After some “discussion” on where we might spend the night, we opt for crashing under a bridge near the highway and christen it the “concrete tent”.

03.30: Some dogs briefly join us under the bridge, they found it a bit cramped and decided to move on after not too long.

08.00: Aroused by the strong smell of sheep dung under the bridge we head into the beautiful town of Sibiu. The architecture and cobbled streets are stunning, could have been in France, Switzerland or Italy. We take a coffee and Luke wonders who the homeless man staring back at him from the mirror is. I wonder.

10.30: We had been hoping to meet up with three friends who were down the road in Brasov, but in the end we decided to roll the dice and head to the Transfagarasan Pass. So we jumped on a train to get a bit closer, hoping our thumbs would do the rest of the work. A smash and grab job.

13.30: Jump off the train and start walking towards the base of the mountains that stand ahead of us shrouded by immense rain clouds. A lift from a very kind local gets us onto the road, and then a school bus hired  by a group of American artists pulls over and takes us as high as the cable car.

16.00: Now we’re standing in the snow at a little over 2000m altitude. One heck of a view back down the pass, the road they call “Ceausescu’s folly” is entirely insane and I’m already thinking about plans to head back on a bicycle.

20:00: We cruised back into Sibiu on the same bus full of quirky artists, ate a pretty suspect burger and chips and opted to start hitching back towards Arad that evening.

21.30: Picked up by three workers on their way back to Deva. They weren’t in a hurry so we stopped off for coffee and cigarettes and some bizarre conversation at a petrol station.

23.00: Suddenly back in Deva in the middle of the night, lovely. Grabbed some mcflurries and then did our best to get out of there ASAP… eventually being picked up by Romania’s answer to Michael Schumacher in a Mercedes Sprinter van. Man could he drive, and thank goodness as we flirted with a near head on collision at one point.

02.00: We hopped out in Lipova a way short of Arad, sleeping at the ruined castle up on the hill.

07.00: Wake up freezing thanks to the wind sweeping over the hill. Decide to bust out of there with no chance of more sleep.

08.30: Back in our little village of Siria in time for breakfast and a well deserved nap. Over 700km hitched in under 48 hours, now that’s what I call a weekend.

I think just grabbing hold of an idea and running with it is the most exciting way to travel. Cheap, no plans and no frills.

Of course it was back to reality at work the next week… taking pregnant women into hospital, children in the homework club, handing out flour. Also had the humbling experience of being cleaned up twice by people in community this week. Slipping over on my ass outside a house as the 8 kids inside looked on in absolute hysterics, it was very funny and their mum helped clean me up. I also for the first time had a gypsy kid poo on me this week, a year and nine months of picking up beautiful children is a good run of not getting messy, and again someone helped wiping me up.

Love this place, people, country. Thanks for the prayers and support.

One thought on “Smash and Grab.”